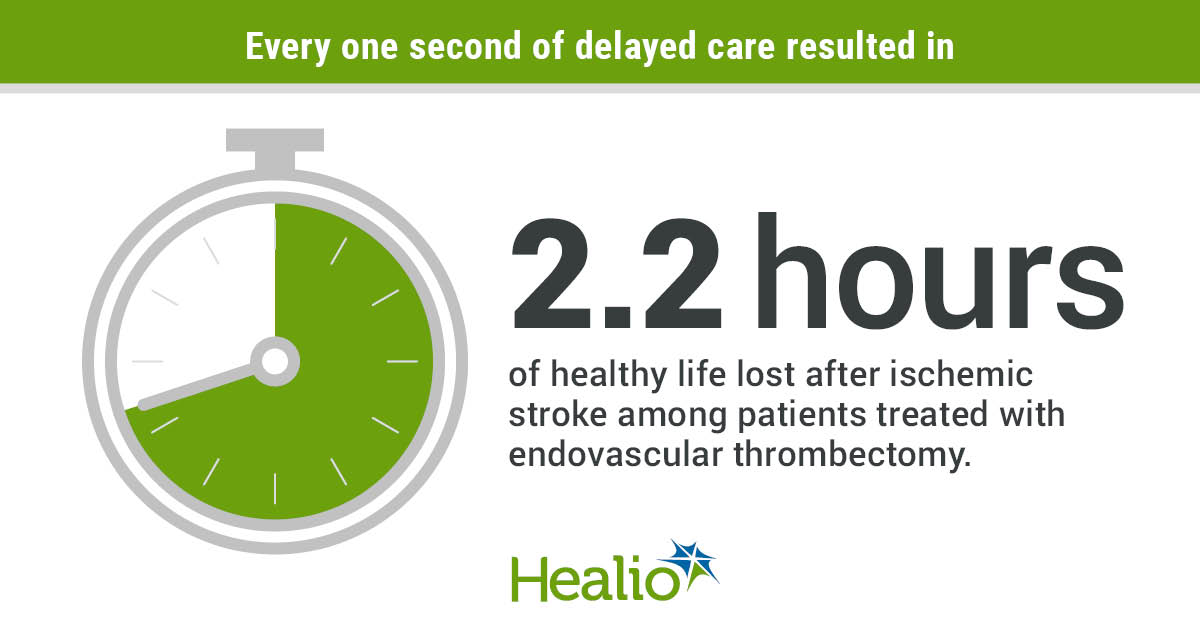 
Disclosures:
Almekhlafi reports serving on a scientific advisory board for Palmera Medical. Please see the study for all other authors’ relevant financial disclosures.


Receive an email when new articles are posted on

Please provide your email address to receive an email when new articles are posted on .
We were unable to process your request. Please try again later. If you continue to have this issue please contact [email protected]

Delays in care after acute ischemic stroke correlated with loss of healthy life-years among patients treated with endovascular thrombectomy, especially in the post-arrival period, according to findings published in JAMA Neurology.

Specifically, the researchers found that every 1 second of delay in care was associated with the loss of 2.2 hours of healthy life, a finding that they hope “may encourage continuous quality improvement in door-to-treatment times.”

“One of the most important determinants of outcome after acute ischemic stroke is rapid reperfusion via intravenous thrombolysis, [endovascular thrombectomy] or both, reducing total brain ischemia time,” the researchers wrote. “Previous analyses of the association of faster treatment delivery with improved patient outcomes have been limited.”

Reasons for these limitations include a focus on “binary functional outcomes” in time-benefit studies and an emphasis on the time interval from onset/last known well time to last known well/onset to puncture time, according to Mohammed Almekhlafi, MD, MSc, FRCPC, assistant professor of clinical neurosciences, radiology and community health sciences and full member of the Hotchkiss Brain Institute at the University of Calgary, and colleagues wrote. Analyses of time-benefit associations using last known well/onset to puncture time “are imprecise and systematically biased toward the null,” Almekhalfi and colleagues wrote.

The researchers aimed to “address these limitations” through a series of analyses that decreased “these sources of imprecision and bias toward the null, including by evaluating outcomes along the full health-related quality of life range, with lead analyses focused on onset-to-treatment times in patients arriving early, among whom patients with fast progression are likely to be fully represented, and door-to-treatment times, as their intervals begin with precisely known time of emergency department arrival rather than imprecisely known last known well time.”

Almekhlafi and colleagues included all studies from a database search for randomized clinical trials of stent retriever thrombectomy devices vs. medical therapy in patients with anterior circulation large-vessel occlusion within 12 hours of the last known well time. The researchers also required studies to have peer-reviewed, complete primary results published by August 1, 2020.

The researchers collected patient-level data on clinical and imaging characteristics, as well as functional outcomes, from the seven trials included in the analysis, and examined “detailed time metrics,” including last known well–to-door (LKWTD) time, last known well/onset to puncture (LKWTP) time, last known well to reperfusion (LKWR) time, door to puncture (DTP) time and door to reperfusion (DTR) time. Change in healthy life years as measured by disability-adjusted life-years served as the outcome measure and were calculated as the sum of years of life lost because of premature mortality and years of healthy life lost because of disability.

The study included 781 patients who had an ischemic stroke and were treated with endovascular thrombectomy. More than half of these patients (n = 406; 52%) received early treatment (LKWTP, 4 hours), while the rest (n = 375; 48%) received late treatment (LKWTP, >4 to 12 hours). In the early-treated population, mean age was 66.2 years, 46.6% were women, and the median pretreatment NIH Stroke Scale score was 18 (interquartile range [IQR], 14-21). Patients in the late-treated group were generally comparable, although substantial reperfusion was achieved more often in early-treated compared with late-treated patients (298 of 380 [78.4%] vs. 238 of 348 [68.4%]).

When the researchers considered “granular time increments,” they found that the amount of healthy life-time lost correlated with every 1 second of delay was 2.2 hours for DTP and 2.4 hours for DTR.

Conversely, the study demonstrated no relationship between treatment delay and outcomes “for several care process intervals that have less precision of temporal measurement, less representation of fast as well as slow progressors, or both,” the researchers wrote. Imprecision in recording the timing of the onset of the stroke is likely the factor with the greatest impact, according to Almekhlafi and colleagues.

The results indicate that timely reperfusion done successfully represents “an important factor” that correlates with endovascular thrombectomy outcomes, they continued.

“Delays, particularly after arrival to the hospital until reperfusion is achieved, may result in substantial losses in years of healthy life for patients,” Almekhlafi and colleagues wrote. “Efforts to optimize workflow and eliminate barriers preventing timely patient evaluation and treatment within health care systems are warranted.”


Receive an email when new articles are posted on

Please provide your email address to receive an email when new articles are posted on .
We were unable to process your request. Please try again later. If you continue to have this issue please contact [email protected]